A couple of years back I kickstarted the “Recreated ZX Spectrum”, a creation by Elite who basically made a Spectrum case and turned it into a Bluetooth/USB keyboard with an Android/iOS app to interface and be a Spectrum emulator.

It was one of my first experiences that kickstarter projects where a bit of risk; let’s just say that I was not impressed with the organisation and professionalism of Elite. What irritated me most was that I saw it for sale in Maplins before mine was even dispatched.

To be honest though, it’s sat in a corner of my office doing nothing since it arrived. 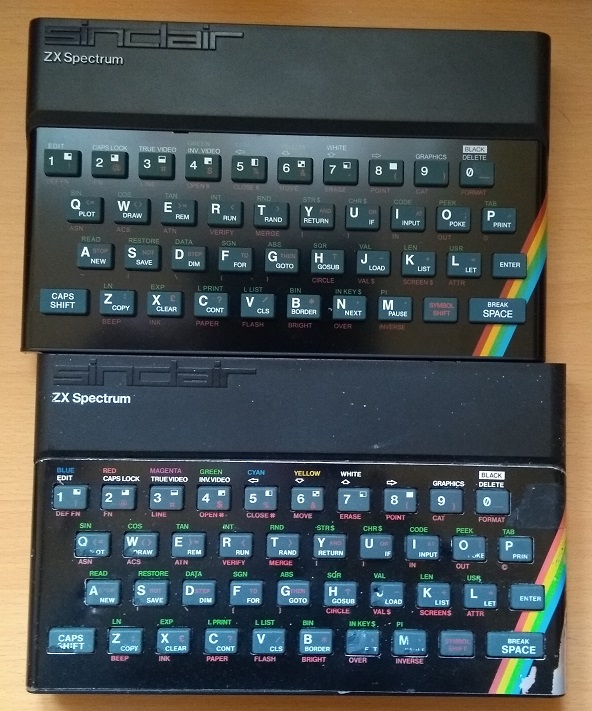 On the bottom is a space to place two rechargable AA cells to allow it act wirelessly and seven screws. One of which was covered by a QC Pass sticker, which could easily be pealed off. There’s even a place where speaker holes are on a real Spectrum (though this has no speaker. 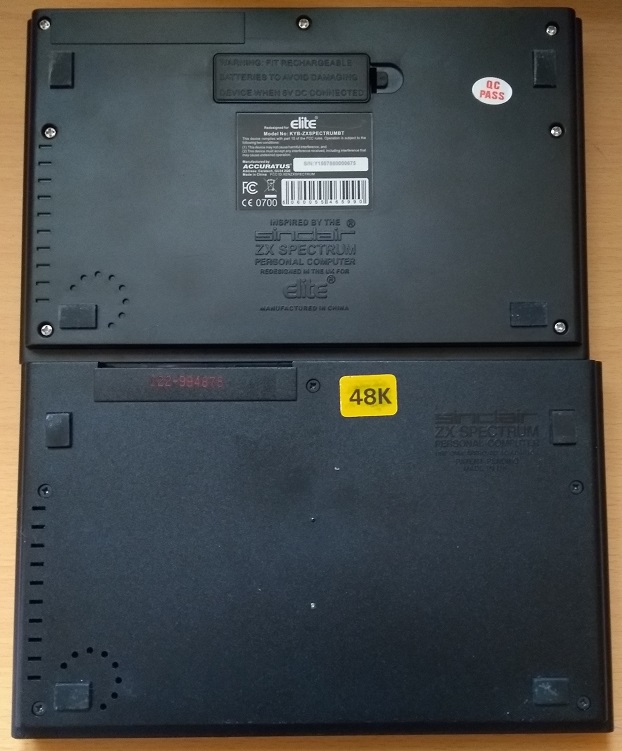 Interestingly enough there’s an FCC ID (XEN-ZXSPECTRUM) and a hint of the manufacturer (Accuratus) and a “made in China”. Now that’s useful. The US Federal Communications Commission require that electronic devices are check for RF emissions. What’s the most useful is that this can show us what stuff looks like without taking it apart.

And lo, a search for the FCC-ID reveals the goods!

What we have here are a load of form filling, but some internal photos which show us the mesh keyboard, which is pretty much an exact copy of the Spectrum’s; though annoyingly the connector isn’t compatible.

We can see the (tiny) main circuit board and the Bluetooth module separately, though we can only read the chip name on the Bluetooth module, which is an ISSC IS1852S, made by Microchip. I can’t find a datasheet for this, but I can find information for a IS1652N, so I’m wondering whether this my old eyes and will take a better photo once I take the cover off.

The IS1652N is a Bluetooth 3.0 controller designed for devices in the HID (Human Interface Devices) class. This would perfectly suit the Spectrum Next’s use as a keyboard. So I’m assuming that is mostly correct.

Before I crack it open, in a perfect example of how badly managed and thought out the device is: it comes in a “locked state” which is designed to only be used by with the app and as a game keyboard. Which means that most of the keys don’t do anything.

I cannot understand what the decision behind this was, it makes zero sense.

Anyway, you can unlock it online at the Elite systems web site (for now at least).

You have to accept terms and conditions to go through this. Hmmm… I don’t think so. Looking at the source, the unlocked is written in JavaScript, so to avoid any copyright problems, I’ve rewritten it in python.

The unlocking process takes a string from the keyboard (which is provided by pressing Caps Shift) and mangles it before decrypting it with DES and a static password, following this process:

To demonstrate this, I’m going to use the code in the unlocking video.

And, as you can see, the code matches, and I unlocked my Recreated Spectrum this way to prove it. The algorithm is simple, the device sends four 32 bit integers in hex format. These are mangled into two 64 bit numbers, but on the way the endianness is changed.

These 64 bit numbers are taken in their hex form (including the 0x), padded with NULs and encrypted with DES in ECB mode with a static key of “H3U89XT1”; the two encoded numbers are xor’d together and returned as a decimal number.